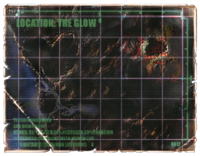 „
The primary West Tec research facility was partially destroyed during the Great War when it took a direct hit from a nuclear warhead, leaving the area heavily irradiated.
”

Glow or rather West Tec research facility as it's pre-war name is a dungeon for experienced solo wastelander or middle advanced groups. Currently this place is being swarmed by Player killers.

It is important to note that the Glow, true to its name, is one of the most highly irradiated locations in the Fallout universe. A few moments of exposure inside Glow is enough to give the player a lethal dose of rads. Use of Rad-X to boost Radiation Resistance to 95% is widely considered absolutely necessary to survive a trip to the Glow. (Minimum of 3 doses of rad-x is recommended) It is also a good idea to take with you some Radaway and armor with radiation protection, as you will probably spend quite some time in Glow.

In Glow there's plenty of nasty mean robots. Brainbots type are capable of burst that can deal a lot of damage if inflicted on 1-hex. Otherwise they aren't that dangerous. They are tough though as they have around 350hp. The second kind - Floating Eye robots are having much less hp and don't have any range type attack. Don't get fooled though as those melee bots are bigger threat. They are really fast and their damage is very big(And since its electric type of damage they bypass most of the common armors.) Both kind of robots in Glow are not lootable. Once killed they will respawn after certain amount of time passes. (Around 30 minutes.)

Enter the location, and go straight into Hole. You'll enter to level 1. On this level there is no enemies, but there are some lockers. Search them for Yellow Glow Keycard. In one of the rooms you will find group of Ghouls. Talk to the Ghoul named Rombie, he will ask you to deliver holodisk to level 2 computer. Agree to it and move there.

Level two is a place where Yellow Glow Key card might also spawn. There is one robot group there. Kill Robots, browse though containers and loot computer consoles for electronic parts. Then bring virus to computer located there. Return to Rombie and he will give you Blue Pass Key. Now you're ready to go further!

Note: Both on level 1 and a level 2 you can fall down to level 3. If this will happen you will loss some hit points, won't be able to move for a short while and might get crippled. In other words if you fell down you will probably die to robots that are on level 3 so pro tip: Don't fall down.

Level three is much more interesting than level 2, there is small robot detachment there, but also two rooms opened only by electronic lockpick, there you can find premium resources such as high grade steel or Kevlar Polymers. To go further into next levels you will need Yellow Glow Keycard. So make sure you found one. If not then you will need to wait till contents of lockers respawn.

Level four contains another robot group, one room opened only by electronic lockpick and Huge computer. Look there for Red Glow Key card and other loot. If your science skill is high (at least 101%) you might try to turn on generator opening way to level 5. If you don't have enough science or didn't found red key card you'll need to venture into level 6.

Level 6 contains more robots and another batch of lockers to browse through. It's a good place to find colored flares and electronic lockpicks as players usually don't loot this level (they rush down to level 5 leaving the "basic" Glow loot untouched). There is also damaged generator which repairing it, is necessary to go to level 5(Unless you have enough science skill to turn on power by talking to ZAX on level 4).

If you decide to enter level 5 by repairing the generator you should repair it with a char that is having high amount of skill points invested into repair skill, as the better you are at repairing stuff the more time you will have for exploration of level 5. You can still repair generator with even most pathetic repair skills but it will be working just for short while. It is advised to have at least 100% in repair or use tools/super tool kit when going for this route.

Level 5 is the final level of Glow. To get here you need Red Glow Key card and you need to bring back power to the elevator by either speaking with ZAX on level 4(About 101% science needed, grants about 10 minutes of time for browsing though level 5) or by repairing the generator on level 6(With about 100% repair, you will get only about 5 min of time, the better you at repairing stuff, the more time will be at your disposal).

After you're done with bringing up power - hurry! Your time for exploring this area is limited. After you feel that you're running out of time go back to either 4 or 6 level and repeat the power delivery job. If you run out of time while being on level 5 you will need help from other players or you'll die there due to radiation or robots.

Three of rooms on level 5 are closed and cannot be lock picked. You will need to bring Blue Pass Key to the computer in the middle in order to open those doors(You will have like 10 min for looting those rooms before the doors close again) Storage room contains many containers which are protected by lock.

This level contains most of precious loot. A lot of drugs and weaponry. Sometimes you might even find implants here.

Glow dungeon is made of 6 levels. There is also small onground map.

Q: How often can i receive Blue Pass Card quest?

A: There is 2-3 hours cooldown for each character for this quest. Exact time is unknown.

A: They spawn on level 5 in rooms protected by Blue Pass card. They are very rare.

Q: How to use elevator with multiple people?

A: Just tag the person using elevator and stand as close to him or her as its possible.

Q: How to avoid getting spawn killed?

A: If you're doing Glow alone, you can't. If you're doing it with friends give one of your friend an observer task - made him patrol regions already explored making sure that there is no hostile players awaiting your group.

A: Very often. The loot respawn (probably) every 20 minutes.

Q: In update post (Link). there's some information about Glow's secret, what it is?

A: Go to ZaX on level 4. If you have at least 21 level, go search through the dialogue so long till the computer offer you to play a friendly match of chess. You have only one chance per one real time day. If you loss then nothing will happen. If you win you'll gain one of 3 possible bonuses (you will get to choose it):

In order to win a match against ZaX starting from session 3 you are 100% sure to receive a bonus if you have at least 8 intelligence. It cannot be done with lower intelligence. Mentats works though!