A Fallout 1 Graphic of Mariposa Vats.

„
A former United States military base. It is the stronghold of remaining Super Mutant from the Master's army, who's legacy is continue by his formed second-in-command, the infamous Lieutenant.
”

Mariposa has been added to the game as a full fledged dungeon on 02.07.2016. Currently Mariposa is a two-parted dungeon. The first part of it - surface is open at any time and can be cleared with very small team or even perhaps solo. The second part, the fortress itself is a giant challenge set up for many, many wastelanders and is currently the hardest PvE challenge game can offer. To get inside the Military Base players need special item: The explosive filled backpack.

During the Night following the update a special event was made. A bomb, which is key to Mariposa has been put in one of the dungeons around the world of FOnline2. It was series of huge fights in the dungeon one after another until the owner of the item was decided. It turned out that bomb was placed in Ares. Many gangs tried to get it but in the end, the collaboration of BBS, Rogues, Hello Kitties and Amboy Dukes managed to reclaim the bomb against the Gang of Siberian Bears.

There's seven Super Mutants guarding the surface. Each of these Mutants are spawned with either a Big Gun or Energy Weapon. Each Mutant has 500 hp and worth 1000 experience points. They cannot be looted. Inside there is crazy number of these Super Mutants, they respawn very fast and take numerous positions in the map.

The biggest, meanest and strongest super mutant in the entire world of FOnline2. Hes fought throughout his entire life, he's killed many enemies and emerged victorious from every clash he had took part in. After Master's defeat Lieutenant did not fall into despair but started his own faction. He's most famous victory had been against Enclave. On July 2236 Enclave send Full Scale Assault against Fortress Mariposa. The attack was lead by Frank Horrigan. Lieutenant not only had successfully defended from that attack but also manages to kill and loot enemy commander. If was that moment when he obtained the strongest weapon on the whole continent - The Plasma Gatling.

Mariposa is being protected by network of force field emitters. The Red one can be moved through (though slightly damaging you) or temporarily disabled by using repair on the emitters. The Yellow ones are used exclusively by enemy super mutants (only NPCs can pass through it). In Mariposa there are certain areas that can be accessed only by NPCs. Don't worry about them too much and focus on places where you can get to.

On level 3 just before elevator leading to final boss there is a charged floor trap. To get through it firstly one has to launch pulse overload using the console. This will switch the mode of the trap. Instead of doing regular huge damage to anyone that crosses the floor, the trap will generate random explosions. These random explosions however, are crossable if you are swift like the wind. All you have to do is to move hex by hex in the walking sphere of safety, which will appear once you use the console. It's hard to describe but it's definitely possible to do and not that hard once you get how it works. The problem though, is that you don't have that much time to learn because you will be constantly attacked by Super Mutants.

There are 2 possible spawn points in this location. Surface is quite easy to clear with only few mutants guarding it (7 i believe). There is a tent full of loot in this area. In order to continue and get inside you will need to obtain a bomb first. It can be found on humanoid NPCs like Rogues or Khans. The spawn rate is super rare though so good luck in finding it. In order to activate the bomb point at the Mariposa door then hold opening contexts menu, then select use item option, then select bomb. If you did everything correctly bomb will appear at the doors. You might want to back off a little as the blast is quite huge!

As soon as you enter you will notice a lot of Super Mutants. Go to the right side and regroup there. The Mutants will keep respawning and attacking from entrance point and from above. Once you group is ready proceed further to the elevator. Going to level 2 will be tough. Enemy troops will keep spawning from Elevator point and keep coming from all other possible directions. You can't stay there, move to level 3 as fast as you can with as many people as you can. Accept possible casualties at this point -> for now skip level 2.

This cramped little spawn point is a death trap. As soon as you can disable red force field and try to get out of this room - you need to make space for other players. Regroup at room next to elevator, then proceed next to a charged field. Now it's get tricky. The small terminal next to charge field can set the pulse mode on the floor's trap. Instead of constant damage that no character can withstand it will switch to explode-save-explode mode of operation. It won't be easy, it's tricky and complicated but u can go through it. (Or just use Tesla Armor, for now it looks like Tesla is reducing the damage to the point where one can pass through this trap, although it will be probably changed in next update).

Do not open doors leading to rest of this level till all of your group is in position! Prepare yourself for a Huge fight. A Lieutenant which is the boss of this place will be guarded by a bunch of super guarding robots with Gatling Lasers and Rocket Launchers and once you kill the robots the regular Super Mutants will start coming to back him up. The boss itself is wielding a huge Plasma Gatling that instantly kill everyone on 1-hex and deals a lot of range damage. The Lieutenant also have a lot of Hypos so for the first part of the battle he will heal off any damage - till he run out of hypos. Kill him and loot two items from his body: Plasma Gatling and... his hand. Go to the right side there's a computer that allow to open armory doors on level 2, you can activate it by using Lieutenant's hand and having a good science (probably 130). Use the elevator on right side leading to level 2

This is place where you get to loot a lot of stuff: implants, tier 4 and also tier 4 crafting components. There's an exit here as well. In order to do anything on this level you need to open doors first which you should do on level 3. Just like any other level there are some super mutants here but compared to other levels it is way easier...if you got enough players alive at this point that is.

Mariposa has 5 maps. 1 Surface area and then 4 level of the Military Base. 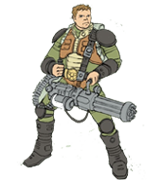