S.P.E.C.I.A.L. is an acronym denoting the seven primary statistics of a FOnline2 character. How your character performs and its role are greatly determined by these values. You can't have more than 10 points and less then 1 point in any of the 7 main statistics.

It is important to remember that there are stat altering drugs in FOnline2, which will allow you to temporarily achieve higher S.P.E.C.I.A.L. values.

A high strength is good for close combat-centric characters. Modifies: starting hit points, melee damage, and carry weight. Difference between your character's actual strength and weapon strength requirement affects chance to get your arms crippled/weapon dropped when hit in arms.

„
The ability to see, hear, taste and notice unusual things. A high perception is important for a sharpshooter. Modifies: sequence, field of view and ranged combat distance modifier.
”

It is a very important attribute and 6 points of perception are often required for a variety of useful perks. To get a precise range of your character's field of view, use the default Q hotkey (it will activate a green vision line). E hotkey activates your weapon range line (red color). Make sure to examine the range of different weapons you're planning to use.

Having High Perception is a key in fighting against sneaking characters. If your opponents are using sneakers and you can't detect them pick a character with higher perception.

„
Stamina and physical toughness. A character with a high endurance will survive where others may not. Modifies: hit points, poison and radiation resistance, healing rate, and the additional hit points per level.
”

Also one of the most important attributes. 10,9,8 are the most common numbers when modifying this statistic.

„
A combination of appearance and charm. A high charisma is important for characters that want to influence people with words. Modifies: NPC reactions and barter prices.
”

Charisma is, unfortunately, the least important statistic. In the future it might be connected with quests or NPC reactions as it used to work in the original Fallout series, but for now charisma is only used to determine how many people can follow you into the wasteland. With 1 point invested into charisma only two people can travel with you, while for every next point of charisma you can pick up an extra wastelander.

„
Knowledge, wisdom and the ability to think quickly. A high intelligence is important for any character. Modifies: the number of new skill points per level, dialogue options and various skills.
”

As skill points are vital, intelligence is also vital.

„
Coordination and the ability to move swiftly. A high agility is important for any active character. Modifies: action points, armor class, sequence and various skills.
”

A large number of perks in world of FOnline2 require agility. It also determines the number of your character's action points. If you're planning on playing in turn based mode, you should aim for the highest possible amount of action points.

„
Fate. Karma. An extremely high or low luck will affect the character - somehow. Events and situations will be changed by how lucky (or unlucky) your character is.
”

The most mysterious attribute. Crucial for snipers as every point invested in luck will grant you a better chance for your aimed shot to become a critical one. It is also important for evading bad effects of being critically shot.

When it comes to critical misses, a character with poor luck will receive severe penalties in case of a critical miss.

IMPORTANT NOTE: the character sheet will tell you that each point of luck increases your critical chance by a mere 1%. While this is true, things work differently when it comes to aimed shots. When you make a successful aimed shot, the base critical chance is multiplied by a certain number. Mysterious? Damn right. Nevertheless, the difference in one point of luck is much bigger than 1% for aimed shots, especially when aiming eyes, head or groin. 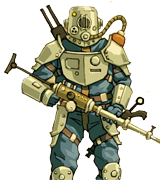