From FOnline 2 Wiki
Revision as of 13:36, 23 July 2016 by Xsarq (talk | contribs) (Created page with "right|210px|thumb|FOnline2 World map with quest locations marked on it. ==Description== As any other MMORPG, the world of FOnline2 is full of various...")
(diff) ← Older revision | Latest revision (diff) | Newer revision → (diff)
Jump to navigation Jump to search 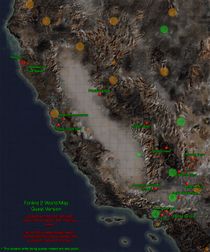 FOnline2 World map with quest locations marked on it.

As any other MMORPG, the world of FOnline2 is full of various NPCs, and all of those NPCs have their own problems and plenty of caps they are ready to part with if you are willing to help them, while a wastelander (that would be you) needs caps and experience. See the connection here? Also, besides caps and experience, you can also receive many valuable items and positive karma as well. To explain it in a nutshell, doing quests is fun!

Some of the quests require you to go to a specific quest-related location. It is however important to remember that once these locations become visible on your worldmap, you will have limited time to go to those locations and finish the taken quest (usually few days in real time, so make sure that you have informed yourself in advance about certain missions, since your character might not be tough enough to finish them, consequently making those locations disappear and the quests unfinished).

Quests locations are private, meaning that only you can see them on the worldmap. However, you can lead other people with you so they can assist you in fighting your enemies, but they cannot see those locations without your guidance.

Means that it's a one-time quest.

Means that this quest can be done repeatedly, but only after a 5 hours cooldown.

Means it's more of a little task than a quest.

Means that the NPC who gave you the quest is a collector of certain items.

This quests are currently blocked. Maybe one day they get unlocked?