Difference between revisions of "Suspicious Church"

Work in the progres

Suspicious Church displays as Suspicious Ruins on world map. It is the wast underground chem factory filled with drugs and raiders. It is the best, out of all world map events, in terms of providing players with jet and psycho. If you see one pop up in crowded area you it might be risky to try to clean it due to high popularity of this dungeon. In general there are three zones where this dungeon spawns:

Surface is very easy, the only thing you have to do basicly is spawn. NPCs are hidden in church, whenever you will come to their line of sight they will rush toward you, straight into mines. Yes, those idiots will just walk on their OWN landmines, which make surface basicly clear. From now on you can take two routes hard (1) and easy one(2). If you are by yourself i suggest to take easier way.

First of all remember, enemies might not be hard to kill, whole dungeon is guarded by mid level humanoids like raiders or mercenaries but ammount of them is just crazy. You will have to deal with like 25+ NPC. Which is rather a lot

It is rather slow and conventional route which you can make fast if you have some splash DMG, in other case i would suggest route 2

When you spawn, DO NOT MOVE place where you have came is filled with mines. Try to disarm them while going to the right side. And from that point you have two option how to do it. Either kill everything which is located there. Same like with route 1 OR you can lure NPC to STEP ON THE MINES. True it require a bit of skill and experience with handling stuff like that but it make it the fastest way to clear that dungeon. You have however preper esape route through mines beforehand. To do it that way you have to open door and run straight out of NPC sight. When mines on one side deplete ( Usualy the upper side ) you are just moving to the bottom for new set of mines. Rest is going more or less like route 1. Clear rest which didn't got agro and rush the loot.

HOWEVER, if you are grenader you can do it a bit different. NPC aren't doing that much DMG so you can RUSH past them open the doors to the drug area and close it behind not letting NPC to join you inside. IT is rather hard but duable. BUT why do it that way? Because if somebody will spawn and try to rush you NPC will just agro them and you situation will be way better. 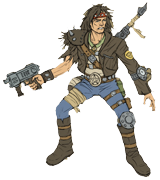